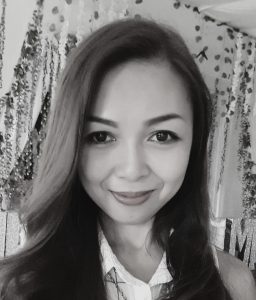 Artist profile
A self taught artist based in Panabo and Davao City. Focuses on realism and figurative style of art. Started drawing and doodling since kindergarten and joined in several art and poster competitions up to secondary level. Joined GAMA group of artists last year December 2021 and the BaiHinang Women group last January 2022. First exhibit was done and showcased last November 2021 at La Herencia, Torres St, Davao City for the show entitled “Art Kollective” then later on with BaiHinang women artists last March 2022 for the show called “Bai Chromatica” and the latest DAFI art exhibit last May 2022. Since then, I’ve been joining several art exhibitions scheduled this year and more upcoming projects are lining up as well. But at the same time, my passion and love in arts has been continually evolving over time. Learning is a never ending process and I embraced it for as long as I could. :”)

“Sayaw sa Pagdayaw” means “Dance in Praise” – tells about the symbolic way of praising and promoting
our nature and culture portrayed by a young Royal Lady of the Bagobo-Tagabawa tribe thru their
traditional dance also known as “Sugod Uno” or the Bagobo Rice Cycle. Her dress tells a lot about stories
and rich symbols of their tribe such as the sun and their people, the rice field, plant and trees, the
flowers, eagles and mountains, the wave patterns of the sea and rivers, the spirits of their ancestors and
more. For the Bagobo, this dance is called Miyamas neng Ommoy. The dance portrays the step-by-step
cycle rice culture; from planting, harvesting, up to the thanksgiving rituals for a bountiful rice harvest.
The colorant of the materials are natural dyes produced by boiling the bark, roots and leaves of plants.
The Bagobo are considered the most colorful people of the Philippines, heavily embroidering their abaca
clothing with beads and stitchwork. They also produce fine metal craft, working in brass, bronze, and
iron, and are known for their betel boxes.
The mountainous region between the upper Pulangi and Davao rivers is the homeland of the Upland
Bagobo, the coastal Bagobo once lived in the hills south and east of Mount Apo, where according a
legend, their supreme god and common ancestor Apo Sandawa ruled as God.