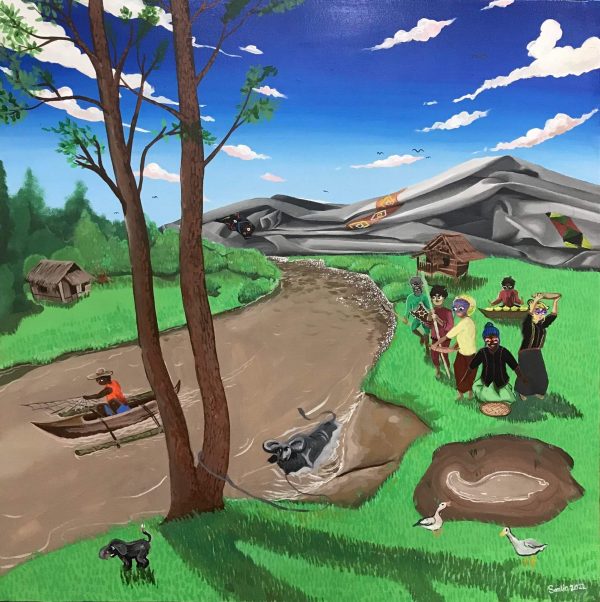 James “Jem” Seville Santia is an enthusiastic artist particularly in painting, a skill which he used throughout his journey in art. He pursued art as his passion from a very young age. His journey in this field started since he took his primary education and became an active representative of his school in various Poster Making contests. During his secondary school, he continued his pursuit in the field of arts by undertaking a Special Program in the Arts program as Visual Artist and participated in numerous contests including poster-making, painting, mural painting and body painting. He also became a Cartoonist and an Artist of the Year during his secondary school. He also took an Art and Design program during his Senior High School to align and learn more about art. Aside from poster making and focusing on the use of acrylic paint, he also explored other mediums such as graphite charcoal, oil paint and water color. Alongside with his engagement to these activities, he also shared his art to his community and school wherein he offered wall art paintings to inspire learning among students and people. He became a member of the Sundog Art Guild under the mentorship of Victor Agustus Dumanging and participated to the Lunang Program under the mentorship of Kublai P. Millan. Fortunately, he also became one of the artists chosen to participate in the DARO. Both Lunang and DARO provided him an opportunity to discover more about his artstyle in paint

The painting depicts the richness in history and cultural aspects of the original settlers and major tribes of Tagum namely Kagan, Mandaya and Mansaka. It portrays the rivers as historical landmarks which became part of the lives of their ancestors, their refuge in times of war, and the place where they went to trade and find other means of living. Moreover, the art shows the three dominant indigenous groups’ beliefs giving value to the conduct of rituals referring to their God as Tagallang na “Magbabaya” whom they traditionally believe the existence as their highest God. This leads to the holding of Kaimunan Festival, a celebration of Culture & Customs of Mindanaoan Tribes performing a ritual offering for the glory of their God.